The contents of this site, and views expressed from external sources shown herein do not necessarily reflect the views and opinions of Everton Football Club.

An Annual General Meeting will be held at least 10 days after the last competitive game of the season.

The following officers will be elected annually:- Chairman, Treasurer, Secretary and Social Secretary.

A maximum of 6 committee members will be elected anually and an auditor will be appointed to oversee the accounts presented to the Annual General Meeting.

Only fully paid up members can vote at the Annual General Meeting.

The committee will meet monthly during the football season and as required during the summer break.

There must be at least 50% of the committee present, with one officer, for meetings to take place.

Amendments or additions to these rules can only be made at the AGM. If necessary, an emergency meeting will be convened if at least 51% of the membership make such a request.

Adult members will pay an annual subscription to join the club to be set at the AGM. If an affiliation fee is levied by Everton Football Club, this will have to be paid in addition to the fee payable to the club.

No fee is payable for juniors under 16 years of age at the time of joining.

Membership fees must be paid prior to receipt of benefit from membership.

All tickets must be ordered not later than the Friday prior to the tickets going on sale unless otherwise stated. Distribution of tickets will be at the discretion of the committee, according to the numbers traveling.

Away tickets will be allocated with priority being given to those members who have attended the most matches, home and away, using the coach provided by the supporter’s club.

Junior membership does not entitle the member to purchase an adult ticket.

The cost of the coach will be decided by the committee at the start of the season and may be reviewed at any time, at the discretion of the committee, according to the numbers traveling.

Non-members will pay an extra £4.00 per person to travel on the coach.

For the benefit of all passengers, foul language and obscene chanting must not be used on the coach.

No alcohol is to be brought on to the coach.

Passengers must be at their pickup point at the time stated.

Passengers must return to the coach immediately after the final whistle.

Further Details
Ticket requests and coach reservations should be made to Bern Bridson, Treasurer on 01423 868783 giving as much notice as possible. Alternatively, you can email your requirements to diane.toffeegirl@ntlworld.com.

The correct remittance to cover the cost of the the ticket(s) should be posted the same day to: 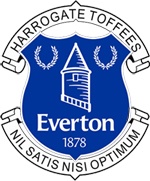